The prompt for the second day of Just Jot it January is… boisterous!

I was fairly sure that ‘boisterous’ meant enthusiastic or rambunctious, but I decided to check just to be sure. I was intrigued by another usage I found when I looked it up:

(of wind, weather, or water) wild or stormy.
“the boisterous wind was lulled”

I have certainly been in some boisterous weather in my life.

The summer that I worked as a commercial fisherman in Alaska, I saw fifteen foot seas! That is to say, from the crests of the waves down to the troughs was fifteen feet. Our ninety-eight-foot fishing boat, The Royal Baron, was a rubber ducky in the tub of a child throwing a tantrum! I almost put on one of the big rubber submersion suits, but it didn’t stay so perilous very long, and in the end, I rode it out without the suit.

(this is not the Baron, but looks almost the same)

Another instance of boisterous seas and skies in my life was the flight which took me for the first time to Jeju Island, where I taught English in the public schools for four years. I flew in on the wings of a typhoon! Talk about turbulence… 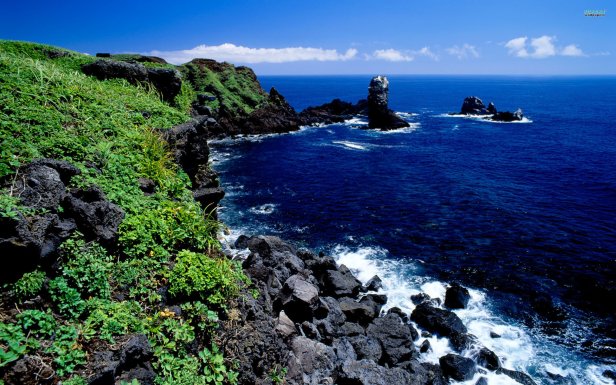 But back to the main definition of the prompt word.

Being boisterous is just about as rare for me as is getting angry. I so rarely become angry… A couple of jobs ago, my supervisor said to me, “You wouldn’t get angry if someone was choking you.” Funny thing is, she was probably right. I would react, certainly, but most likely not with anger. Until afterword. Then I might be mad.

Instead of getting mad, I get sad. What’s more, my presence seems to calm others down to some extent. I am a natural ‘cooler’, de-escalating situations and defusing people before they fly off the handle, or causing them fairly effortlessly to regain themselves if they have already blown their tops. This quality has always come in quite handy for me.

2 thoughts on “rowdy weather and the ‘cooler’”