One of the most challenging things about writing, for me personally, is deciding what to write about. There are of course infinite possible variations on and combinations of character, plot, theme, metaphor, symbol, etc… which does my head in sometimes.

I guess that’s why I love writing prompts and challenges so much.

Yesterday, I asked a friend to help me brainstorm what to write about. Without missing a beat, she said this: “Cats in Space.”

So here I am today, doing a little research on cats in space.

The first thing which came to my mind was – how do cats get to outer space? That question is readily answered by this photo:

Obviously, giant rainbow cats are mounting small planes, riding them into the upper atmosphere, and then leaping out into space.

My question then became this: what do cats look like in space?

My first answer to this question was something approximately like this:

But then I thought harder about what I know of cats, and changed my answer to this:

It was at this point that my research became more fruitful. Delving beyond the ‘image search’, I undertook to read some words to do with cats in space.

The first words about cats in space which caught my eye were these:

Returning, fueled by these words, to ‘image search’, I discovered this:

Sweet album title and cover. Music (as I then discovered via youtube) not so sweet.

While on youtube, I proceeded to view a few short videos: one done up as an episode of Star Trek, but with cats; one of an actual cat in zero gravity; and this gem:

Broadening my search to movies (IMDB) and books (Goodreads), I found these:

My research on cats in space was going well.

But somewhere inside myself, I heard a little voice saying, c’mon now – get real.

So I got real.

And guess what I found?

A cat really did go to space!

Her name was Félicette.

As it turns out, there was even a Kickstarter project just last year to fund a statue of Astrocat to be erected in Paris. The documentation on Kickstarter is thorough and gripping, including this image of the cats from among whom Félicette was selected. 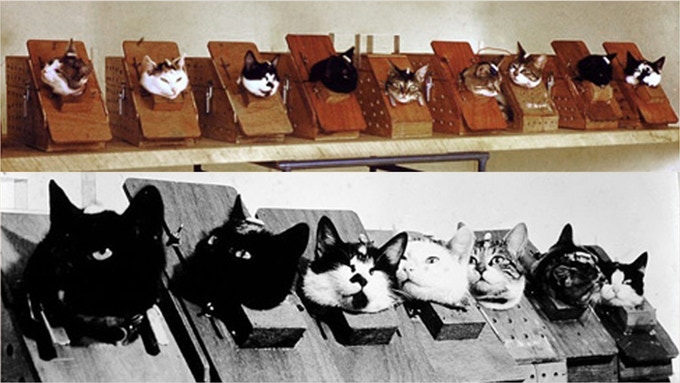 {The cats in training harnesses. Félicette on bottom right.}

But hey, now we know.

I’ll share just one more image from my research on cats in space.